This Piper arrived in England in January 1944 as US Air Force number 43-30036. Assigned to the 8th Air Force, it followed the D-Day landings and the advance of the Liberation of France, led by General Patton towards Germany.

It bears the colours of the 12th TRS (Tactical and Reconnaissance Squadron): blue and white checks on the top of the tail and the nose, like the P51 Mustangs of its squadron. 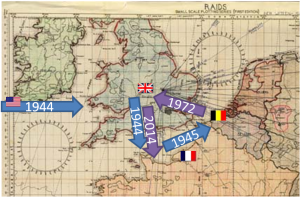 At the end of the Second World War, the US Forces returned to the United States, donating the Piper L-4s to local Allied governments.

43-30036 thus passed into the hands of the Belgian authorities and started its civilian life in Belgium, at the Royal Aero Club of Antwerp, under the registration OO-JOE.

A British owner bought the aircraft in the 1970s.

Restored to its original colours by Sky 4 Aviation in England, it returned to France in late 2013. 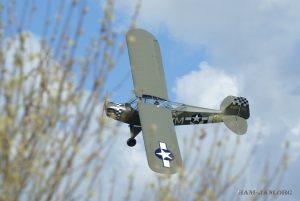 The 12th TRS in World War II: From Operation Overlord to the Advance with General Patton

The 12th TRS was an US Air Force squadron dedicated to tactical reconnaissance.
It was equipped with a diverse fleet during WWII: A-20 Havoc, 1942

On arrival in England in late 1942, the pilots underwent intensive training with the RAF.
The squadron quickly became operational and was repositioned at 8 different bases before D-Day.

The 12th TRS played a major role in photographing the beaches of Normandy in preparation for the Allied landings.

The Piper Cub, (Piper J3) is a light aircraft, built from 1937 to 1947 in the USA by Piper Aircraft.
This tandem aircraft (two seats one behind the other), was initially intended simply for learning to fly. But thanks to its simplicity and low cost, it has become one of the most popular and well-known aircraft of all time. It is reminiscent of what the Ford T is to the automobile. 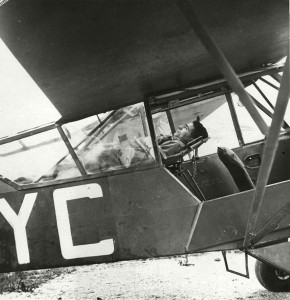 When the U.S. Army was looking for a liaison and observation aircraft, Piper Aircraft modified the Piper J3 by considerably enlarging the glass surface and the aircraft was named O-59 (1941), then L-4 (from April 1942), and NE within the U.S. Navy.

Its role and the multiplicity of its uses were considerable:
Reconnaissance missions, transport of personnel and sensitive equipment, adjustment of artillery fire, medical evacuations of wounded soldiers.

During the liberation of France in 1944, the L-4’s slow speed and manoeuvrability made it an ideal observation platform for spotting German tanks hidden in ambush in the Normandy bocage countryside.

On August 22nd, 1944, at around 10:30 am, Leclerc took place on board his Piper and flew to Laval to meet General Bradley, the only one who could authorise the 2nd armoured division to march on Paris.
On 23 August, a Piper L-4 delivered to the beleaguered Parisians General Leclerc’s famous message: “Hold on, we are coming”. See on this subject the post Mission report 2nd armoured division: General Leclerc&#8217;s message to Parisians dropped in the Prefecture courtyard by a Piper L-4. 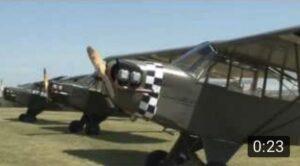 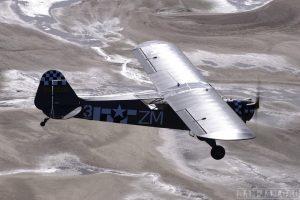 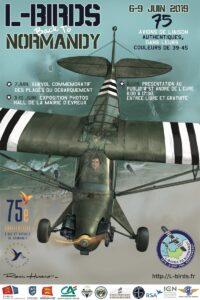 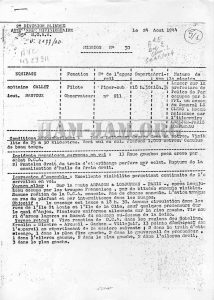 Read More
We use cookies on our website to give you the most relevant experience by remembering your preferences and repeat visits. By clicking “Accept All”, you consent to the use of ALL the cookies. However, you may visit "Cookie Settings" to provide a controlled consent.
Cookie SettingsAccept All
Manage consent