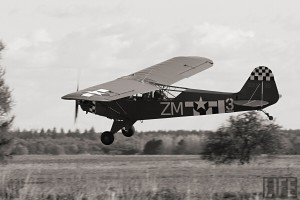 Ham and Jam is an association whose objective is the maintenance in flight condition and the dissemination of knowledge of WWII liaison aircraft, designated L-Birds (L for Liaison), as well as after war trainers.

The L-Birds, yet unarmed, had an important role during the Second World War.
Able to take off from fields, roads or tracks they were the first to arrive. 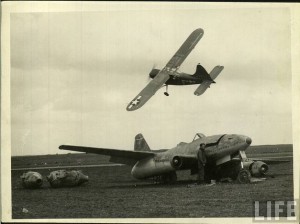 The first American plane to land in Normandy on D-day was an L-5 and four Piper L-4.
An L-5 of the Marines was the first aircraft to land at Iwo Jima, and L-5 crossed the Himalayas in support of the forces of General Chennault, the Flying Tigers.

Their flight characteristics and solid construction allowed them a great versatility: adjustment of artillery fire, observation, logistics support, medical evacuation, transport of Generals to their HQ, such as General Patton and General Eisenhower. 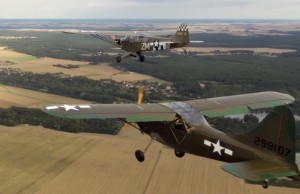 “We cursed those little green High wing aircraft. We knew that having one would be followed by a barrage of artillery and we were doing everything possible to break down. We feared these small aircraft. For us they were the angels of death.”
– German officer taken prisoner, 10th SS Panzer after Falaise.

The ‘L-Birds’ are Liaison aeroplanes used by the USAAF, mainly during the Second World War.
The primary use of these devices was to help ground troops to adjust fire on enemy positions, providing real-time information.

Their qualities the facts quickly be used for many other tasks: they were used as transport aircraft terrain, messengers to the generals, air ambulance to evacuate the wounded or drop medical supplies.
They also served in connection squads, groups of special forces such as the 1st Air Commando Group, tactical reconnaissance squadrons, for example.
They were present from the beaches of the Normandy landings to the Burmese jungle.
Their pilots were carrying out dangerous missions in enemy territory without any ammunition.

They were nicknamed “Maytag Messerschmitt” or “jungle jeep”.

The best known of L-Birds, the Piper L-4 “Grasshopper” and Vultee Stinson L-5 “Sentinel” took part in the conflict on all fronts.

The Taylorcraft L-2 was reserved for training. The Aeronca L-3 participated to some operations in North Africa, Italy, and the Pacific. The career of the L-Birds continued after 1945 in the conflicts of Korea and Vietnam with the Piper L-4, Aeronca L-16, Vultee Stinson L-5, L-17 North American Navion, and Cessna L-19 / O-1 Bird Dog.

The “L” was later replaced by the “O”, for Observation, with the arrival of the Cessna O-2 Skymaster and OV-10 Bronco.

Find details about the two main L-Birds of the Second World War in the sections: Piper L-4 and Vultee Stinson L-5 Sentinel.

Why callling the association Ham and Jam? 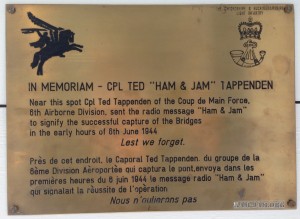 On D-Day, Operation Deadstick was designed to seize the Bénouville Bridge (Pegasus Bridge) and Ranville Bridge, two bridges on the Orne River and the Caen Canal.
Only points of crossing of waterways linking Caen to the sea, the two bridges were to remain intact to permit the passage of troops landed on the beach at Ouistreham

Radio codes were defined to announce the result of the assault:
‘Ham’ to announce that the bridge over the canal was between the British hands and that was not destroyed and ‘Jam’ to indicate the same to the one on the Orne.

We use cookies on our website to give you the most relevant experience by remembering your preferences and repeat visits. By clicking “Accept All”, you consent to the use of ALL the cookies. However, you may visit "Cookie Settings" to provide a controlled consent.
Cookie SettingsAccept All
Manage consent