Paris and liberated France: we flew under the Eiffel Tower

"After May 8, 1945, Victory day, our section joins Paris and arises on the ground of Les Moulineaux, the current heliport.
It's the end of a busy year, with moments of great landscapes, strange adventures, meeting with an exciting environment and exceptional people, friendships, and the immense comfort to have lost no comrade.
But for us, the rebels of the first hour, had to again do something out of the ordinary.
I suggested:
- And if we were flying under the Eiffel Tower?
The flight plan is quickly organized: down the esplanade of the Trocadero and its gardens, the bridge of Jena, pass under the immense Arch of iron, fly over the Champ de Mars and past the military school. There's room to spare.
The next day, the month of May was soon gone past, the weather was superb, our three Piper Cub flew the great passage. There were few people; an American soldier photographed our flight.

It wasn't a feat of flying. It needed more boldness than skill. We had asked permission to no authority.
The air force, such as the Civil Aviation Authority, sailed in the euphoria of victory.
Nowadays, the aviator who would fancy to pass under the legs of the great lady 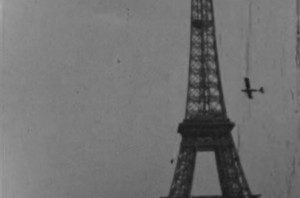 would be severely admonished.
But it was a different time. "It was long ago that the wings of Liberation flew over the France".

Pierre SIMONET, Compagnon de la libération
Observer in Piper Cub with the 1st (1st Regiment of artillery of the DFL R.A., Division of the France Libre)