Our L-5, today registered F-AYLV, came out of the mills Vultee/Stinson, to Wayne to Michigan, early January 1944, with the build number 76-1348.

The following February 11, the US Army Air Forces attributed him the serial 42-99107 and on March 21 he left New York harbor on a cargo ship to Britain where he was landed on 5 April.

It is not known how he was assigned squadron, but the L-5 with the previous registration number was assigned to the 47th Liaison Squadron and the following serial link to the 153rd Squadron.

The detail of its history in Europe during the war is not known. But according to the information in our possession, he participated in the June 6 Disembark, followed Patton's army, and found himself in Belgium, where were stored the American aircraft that participated in the taking of Germany. 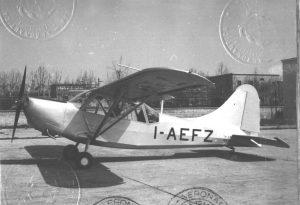 January 16, 1952, when he was taken into account by the Aeronautica Militare Italiana, which was number MM52970 and flew it until 1955. On April 28, he entered civilian life under the registration I-AEFZ, and was active in towing glider in the aeroclub of Parma, until 1994.

Batiolli Italo then chose him to be his third, and most perfect, its restoration, deciding to refurbish it "factory" in detail.

Today, it represents a plane of the 1st group of Air Commandos. This force, designed on a British plan by the high command of the USAAF, was intended to carry out a secret air landing behind the Japanese lines in Burma.

It was to bear 'Chindit' of general Wingate and the General Merrill 'Marauders' troops in their mission to cut enemy supply lines, to prevent an invasion of the India that could lead to the conquest of the Middle East oil.

The Group also had to ensure the provisioning of troops and the evacuation of the wounded.

This unit, commanded by the legendary Col. Philip Cochran, had a central role in the success of the operation.

In addition, in the first large-scale use of light aircraft in combat, with its hundred Stinsons, the 1 st Air Commando Group provided for thousands of Allied soldiers to be in a hospital in India four hours after being injured in the jungle.
Until the they should be abandoned, and the "flying Jeep" was a huge "morale booster" for the troops.

The Stinson L-5 Sentinel has been for Americans what the Storch was for the Germans during the second world war. Widely used in Europe and the Pacific theatres this aircraft, unarmed and having the characteristics of a plane, was nevertheless an indispensable role in operations.

Called by GIs "Flying Jeep", the Sentinel has carried out all types of missions and its success determined his employment in the Korea war.

This remarkable aircraft has an enviable combat record: the first American aircraft to land in Normandy on D-day was a L-5; a L-5, the Marines was the first aircraft to land at Iwo Jima, and the L-5 crossed the Himalayas in support of the forces of General Chennault.

Brave drivers of the 'Guinea Short Lines' recovered with their L - 5s several crews shot down in the jungles of the Philippines.

During the attack in Okinawa, L-5 departed and asked themselves pendus hanged at a side âu suspended cable ship LST, and others, dropped by an aircraft carrier, flew over the ocean on a double distance their flight autonomy, using additional tanks of fortune.

The first 'Forward Air Controller aircraft were L - 5 of the 588eme Fighter Group in Italy, and Korea of l - 5 equipped with recoilless cannons were used as tank destroyers!

Find all the photos in the gallery 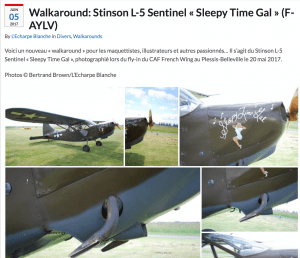 B24 to A10: Visit to the Normandy Tank Museum

Visit with the Stinson L-5, 1943 at the Normandy Tank Museum.

After a take-off of St André de L'eure (U.S. base B24), passage through the highlights of the landing in Normandy and arrival at the Normandy Tank Museum, very welcoming.

The Sentinel was during the second world war the preferred general liaison aircraft.

Like his brother in arms Piper L-4, he was able to land on unpaved strips, barely fields or roads built.

However, most powerful and spacious, it was also faster. Its nickname of Flying Jeep is well deserved.

Set as default language
We use cookies to provide you with the best experience on our website. By continuing to browse this site we consider that you accept this.AcceptRefuse